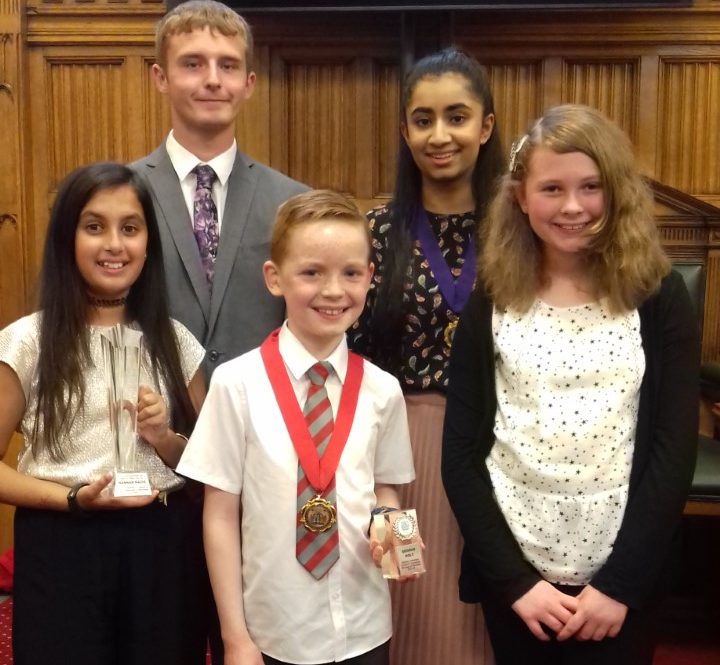 The democratically elected Children's Champion for the borough of Rochdale 2016 - 17 was Hannah Nazir and the Deputy was Madeleine Bamford.  They, with the support of Rochdale Borough Children's Council, put together a manifesto with 3 campaign points and worked hard over their term of office to improve services and lives for local children.  Here is what Hannah and Madeleine want you to know about what they did over the year:

I had 3 campaign points and these have made up the manifesto for the Children’s Council for the last year. These were:

So what have we done about our campaign points?

Well, the Youth Club campaign has been a really tricky one; Zara campaigned on this last year and came up with a list of youth and sport clubs across the Borough.  Unfortunately, the information changes all the time as funding is given to start some up and others funding is cut so they close down.  I decided to meet with Councillor Zaheer to see a club that was started in Deeplish and helped by designing a poster to promote it.  We have also prepared a presentation to show informal cabinet to ask them to help, but also to tell them about all the excellent work we are all doing throughout the Borough.

Another of my points was about e-safety.  We have put together a power point about on-line safety for parents and children which has been sent out to primary schools across the Borough.  We have looked at information aimed at schools, but a lot of it is for high school aged children but children our age and younger have access to the internet through games sites and other things.  We need to know about the dangers and parents need to know that we can be quite sneaky about accessing things – they need to know how to keep us safe at home.  We have also given feedback to the Safeguarding Board about their website and have discussed packs that could be available to parents, of course this is assuming we can get some funding!  I have been promoting NetAware as much as I can too both in the powerpoint we sent out and to Alyson at the Safeguarding Board . NetAware makes it clear to parents and children which apps are safe to use particularly for our age range.  I also spoke to 02 at a big event and they are keen to support us in this!

And finally swimming – I spent an afternoon at Rochdale Leisure centre and spoke to the manager about my swimming campaign.  They agreed that it would be great to encourage more children to take up swimming as a leisure activity.  This campaign has now grown and I’ll tell you why.  A few months ago we met with Public Health to talk about the Childhood Obesity Campaign.  They asked us what we thought about some of the publicity they have produced and we told them how to target children our age and gave them some advice about how to get children to remember to be healthier.  This links in really well with our campaign about swimming . So now the campaign is about getting active – including swimming obviously – and eating more healthily.  We have designed some posters around this and these have been sent to IT department and the designers in the team are going to use these ideas to create a poster using the characters from the Childhood Obesity Campaign. This campaign is going to continue and change even more with our new Children’s Champion.

Other things I have been involved with include; supporting a session with Rochdale youth Service about ‘having your voice heard’ at a community cohesion project involving primary schools and the 6th form college, I’ve taken part in fund raising and spoke at the Mayors Youth Awards .

Even though I’m sad for it to end I know that the Children’s Council will continue to work really hard on their new manifesto points and push to have the voice of Children in the Borough heard at the highest level.

Finally I just want to thank lots of people. Firstly my school Marland Hill Primary for allowing me to attend things and for supporting me as Children’s Champion, next to Youth Service for helping us get to the people we need to so that we could carry out our campaign points, Madeleine for being the best Deputy anyone could want, the Children’s Council members for working as hard as I have, and finally my parents for providing new clothes and taxi services.

I’m going to tell you about some other things as well as the campaigns that we have been involved with.

Over the year more and more of us in the Children’s Council have been talking about litter and children really do care about the way our borough looks, so we have done a couple of litter picks around Matthew Moss Youth Centre and the High School.  It is amazing how much rubbish we collected – almost two full bin bags each time!

During our year in office we have been invited to some amazing things.  We opened the Literature Festival, switched on the Christmas lights and spoke in front of lots of elected members, council officers and members of the public.

Over the summer the Children’s Council did some fundraising for the Mayors Charities . We attended a Youth Service Park event and set up a stall with ‘name the teddy’, ‘How many sweets in a jar’ and my favourite ‘sponge the youth worker’.

We are planning to do more fundraising over this summer too.

Over the year we have been involved in consultations.  Different people have asked our opinions on lots of different subjects. We have talked about extending some existing schools, lifestyle choices, the Safeguarding Board website and the publicity for the Childhood Obesity Campaign to name a few.

I would like to say a huge well done t all of this year's candidates for getting so far!  You have been through a long process and with 68 applicants this year deserve a huge pat on the back for getting so far!  Congratulations to George Holt for being elected as the new Children’s Champion, but the other 5 of you have not ‘lost’, but made amazing achievements already!  One piece of advice I would give you is to stick at it. Still come to the Children’s Council, still have your voice heard and represent other children you know, still attend the events and meet with the decision makers, because I can promise you that you will still gain fab experience, have great fun and learn new skills. You never know, you may be our future MYP!

So now it is time to thank people who have helped me over the last year. To my mum and dad for taking me everywhere I have needed to be. My school, Crossgates Primary, for letting me go to things in school time.  Thanks to the Children’s Council for their help and ideas and to Hannah – we’ve not just worked together well we have become good friends…and maybe when we stand to be MYP Hannah can be my deputy!

And to anybody I might have forgotten – Thank You!

You May Also Enjoy...

Children's Champion Candidates for the 2019 Elections!

What We Got Up to Over Autumn Term...